An interview with Thomas Mee and Dave Sola of MeeFog

MeeFog has always led with science. So, it’s not surprising to discover that founder Thomas Mee, Jr. was an atmospheric physicist. When the firm was founded in 1969, it focused on producing meteorological instrumentation such as cloud particle replicators and ice nucleus particle counters used to study clouds.

Things started to change when Meefog began working on a government-funded research project for cloud seeding to create rain in Los Angeles. The artificial cloud machine developed for that project remains the origin point for all of MeeFog’s current fog technologies. Thomas Mee III, CEO of Mee Industries, explains, “Through this research and development, my father realized that clouds could prevent freezing during cold nights, particularly on spring nights when crops are trying to grow.” He adds, “These early installations were on citrus groves and grape vineyards to protect them against freezing.”

The company then installed lines of atomizing nozzles on telephone poles that sprayed fog over an orchard. While effective, the early system was challenging to control. The wind sometimes blew the fog off course, carrying fog ten times denser than natural fog into neighborhoods and over highways.

The issue of wandering fog eventually ended that line of business, but MeeFog was able to adapt the technology for use in commercial greenhouses. Mee says, “When I joined the company in 1982, most of our business was greenhouse fogging, evaporative cooling, and humidification for greenhouses. And then in the early 90s, we started doing a lot of special effects and a lot of industrial humidification.”

In the early 90s, MeeFog developed its first humidification unit to be installed inside an air handler for commercial applications. “Since that time,” Mee adds, “we’ve done thousands of commercial installations.”

MeeFog’s methods are not only cost-effective, but they are also energy-efficient and can gain LEED points for companies. 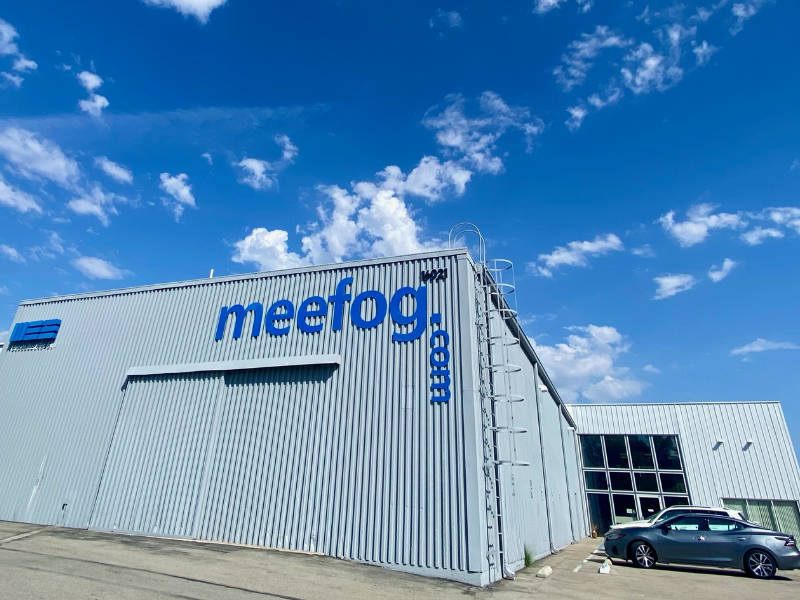 ASHRAE standards initially prohibited the healthcare industry from using adiabatic high-pressure atomization types of systems for humidification, mandating the use of steam instead. Dave Sola, the humification sales manager at MeeFog, explains, “The problem with steam is a large amount of energy is required to produce it. So professionals began to encourage ASHRAE to allow other, more energy-efficient systems to be used. And they finally changed rules to allow adiabatic high-pressure types of humidification systems as well as steam systems hospitals.”

Today, MeeFog has many medical customers. “I suspect that healthcare will probably become a dominant market in years to come,” Sola notes.

Nozzles are what make a MeeFog product unique. The humidifiers purify the water through reverse osmosis, removing minerals and bacteria. It is then fed to a high-pressure pump which raises the water pressure extremely high. As the high-pressure water is passed through these nozzles, the water is atomized, and the tiny droplets are evaporated into the air stream inside the air handler. Staging valves limit the number of nozzles running at any given time allowing the user to control the output. MeeFog’s specialized nozzles ensure that the maximum amount of water is evaporated. Sola explains, “We manufacture this nozzle in the United States in our California factory. Most other humidifier manufacturers purchase standard, premade nozzles for their products.”

He continues, “Our nozzles have special, proprietary characteristics that allow us to produce the finest droplets available on the market. The smaller the particles, the more efficiently they evaporate.”

From COVID to Cannabis

The company invests in product development, always looking at ways to improve the process. Because the firm installs and services its equipment, it can gather customer feedback that informs innovations. “For example, if we find that that particular valve isn’t functioning as it should, we can quickly remedy it,” Mee explains. “Building on this kind of on-site interaction, we have launched three new product lines.”

One of these new product lines is a sprayer created to disinfect spaces during the COVID-19 pandemic. “This sprayer is unique in its ability to fill a room with fog quickly,” Mee says. “It is a handheld sprayer, sort of like a pressure washer with a trigger, that sprays a plume of fog out 20 feet and disinfects a room.”

This product became popular during the beginning of the pandemic, but after the CDC announced that COVID isn’t transmitted on surfaces, sales for disinfectant purposes slowed. Next, these products were shipped to a plant nursery, where the owner’s daughter created a video of it being used to spray cannabis. Once the video was posted to social media, other cannabis growers began to request the same tool. As a result, MeeFog now sells around six spray systems a month to cannabis growers. “We are always developing something new,” Mee emphasizes.

Want to Learn More About MeeFog?

Coward Environmental Systems, Inc. proudly represents MeeFog in the Philadelphia region, Central PA, Delaware, and Maryland. Contact us today to discover how MeeFog can be a part of your next project.