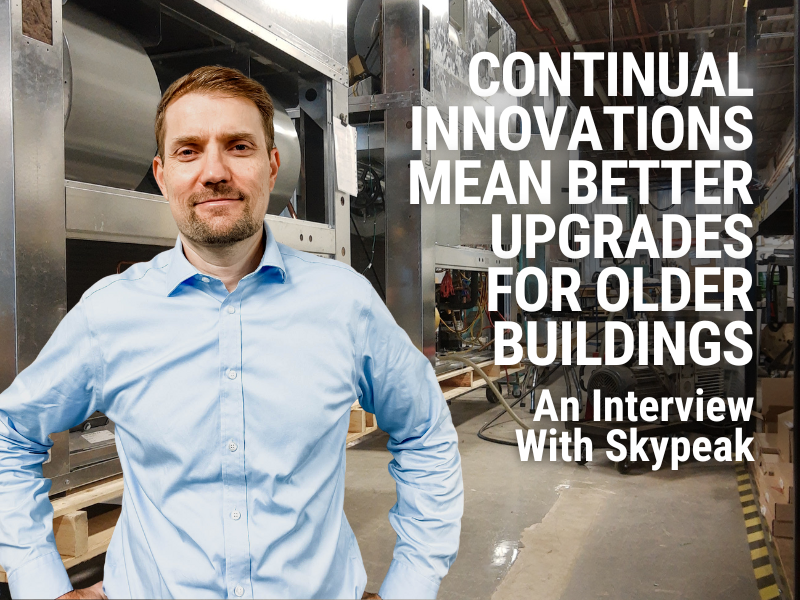 An interview with Eugene Sieber

In 1989, Skymark international was founded and originally produced the horizontal product line, later expanding to include the vertical air-cooled and vertical water-cooled series. In 2007, Johnson Controls acquired Skymark. The product was redesigned to contain the newest refrigerant, R-410A, to meet the latest ASHRAE requirements.

In April 2021, the product was sold and acquired by Sigma Heating and Cooling. Skypeak is the continuation of nearly 30 years of design and development of the Johnson Controls Commercial Self-Contained (CSC) series.

Eugene Sieber, the Director of Sales & Customer Service at Sigma, has worked with the Skypeak product for years. He explains, “I started in 2004 as a sales engineer. Then I transitioned into product design when Johnson Controls acquired the brand. I have been working closely with this product for quite some time now, and during its transition, so I have witnessed many of the subsequent improvements.”

Although the product was acquired in April of 2021 on paper, Sigma had no physical product or process at that point. “The engineering team and production team were able to absorb the design and integrate it into our native processes and began building the first units in August of that year,” Sieber says. “So, in less than five months, the company was able to start manufacturing, which was a real feat and accomplishment for our engineering team.”

The Skypeak product lines are vertical air-cooled, horizontal air-cooled, and vertical water-cooled. Vertical air-cooled systems are especially appropriate for use in older buildings, such as those found in Chicago and New York City, with no existing AC systems. A window opening in the building is utilized to circulate the condenser air without making any changes to the architecture of the building. This way, floor-by-floor cooling or zone-by-zone cooling can be achieved.

The horizontal air-cooled units are perfect in a building with no floor space, as these systems are mounted in the ceiling. 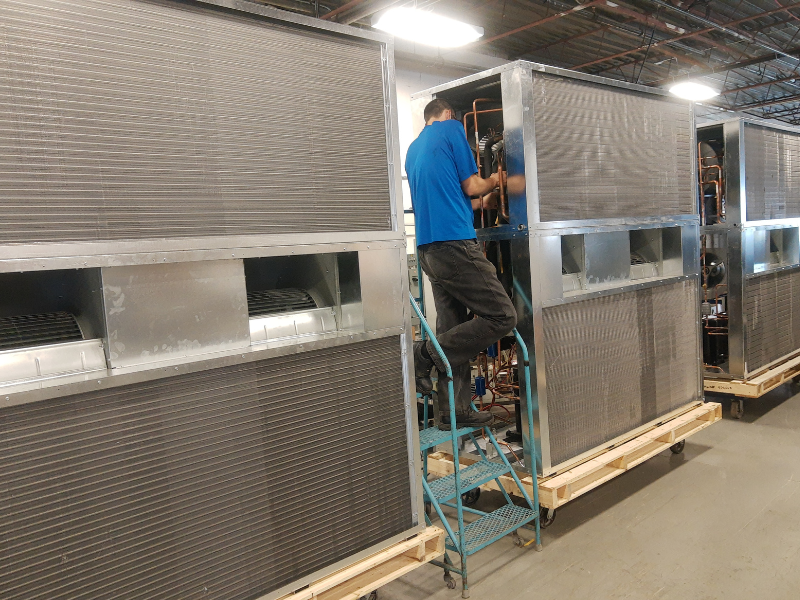 Skypeak’s water-cooled units can be installed in building systems that have a water loop but can also work in commercial applications where there are chilled water systems. An economizer coil can be used with this unit, and a DX system can be installed as a backup or as a redundant backup. These units are an ideal fit for pharma and healthcare applications because of the DX backup. If the chilled water system has to go down for maintenance or there is an unforeseen interruption, a backup system is essential in these critical applications.

Skypeak products can easily be split and packaged. All packages are designed to fit through a 36-inch-wide doorway, regardless of the unit size. This makes installation easy when otherwise, hoists and cranes must be used to move equipment.

All units are ETL certified and listed and meet current stringent ASHRAE and UL standards for equipment safety, performance, and energy efficiency. Skypeak units also use green-friendly R-410A refrigerant. In addition, the company offers a cost-effective commercial cooling option, starting at about $1,200 per ton, and offers easy service and readily available components.

Skypeak is Always Looking Ahead

The next generation of Skypeak units is already in the works. The units will comply with the new DOE standard in 2024, the latest UL standard, UL 60335, and the new A2L refrigerant standard.

Skypeak recently partnered with Siemens to integrate all controls into one seamless package. This will allow Skypeak to have standard features that include BACnet, automation system compatibility, WIFI access to units, embedded controls for the economizer, and ambient control.

The company is looking into modular systems, which will allow for units to be packaged and shipped in smaller packages, and also allows for expansion as customers expand their facilities. Sieber explains, “This will help with a growing AC demand and allow more capacity to be added to our units.”

He continues, “The perfect application would be a server room. They get built up and have a certain load requirement. That load requirement is likely to change and increase as demand changes.”

Back in 2004, Sieber sent corrosion-resistant Skypeak units to one of Ontario’s largest steel mills. Sieber says, “They recently visited our facility, and the same units I sold to them back in 2004 and 2005 are still operating. These units completely exceeded their expectations. They thought they would be changing out the units in five to seven years based on the harsh environment that they’re in. But here they are, still operating 18 years later.”

Skypeak is ready to take on challenges and design systems to meet each customer’s individual needs. Sieber explains, “One of the challenges we see from time to time is a request for a retrofit application. Customers are trying to replace units from 40 to 50 years ago with similar systems.”

He continues, “Current systems are more efficient, which means they are larger and do not quite fit into these spaces. In these cases, the Skypeak team can design novel ways of changing the location of the service access panels and the connection points to meet the customer’s requirements and get the package into that footprint. We are more than willing to work with our customers and explore special customization options to meet their needs.

Want to Learn More About Skypeak?

Coward Environmental Systems, Inc. is proud to represent Skypeak in the Philadelphia region, Central PA, Delaware, and Maryland. Contact us today to discover how Skypeak can be a part of your next project.

Accurate Airflow Monitoring not Only Keeps Occupants Safe, but it can Also Result in Substantial Energy Savings.