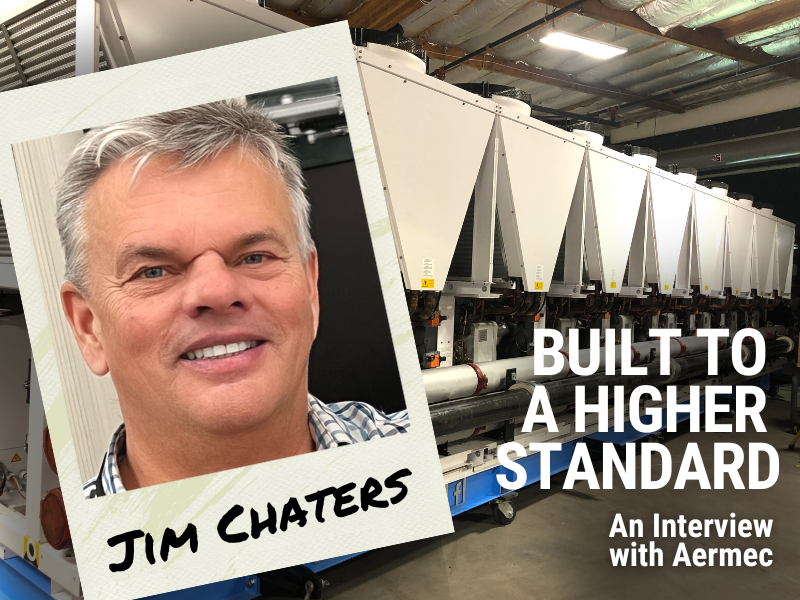 An Interview with Jim Chaters from Aermec

Founded in 1961, Aermec has been in business for over 60 years and is a third-generation family-owned business. The company is the largest independently owned HVAC manufacturer in Europe and has been building commercial heat pumps for longer than any other manufacturer. In 2003, Aermec entered the North American market.

Jim Chaters, the North American sales manager at Aermec, says, “When I first came across Aermec, I was looking for a fan coil to sell in Canada. I found the company online, and they had nobody selling in Canada, so they let me enter the market.”

He continues, “I went around to engineers across Canada, selling the ‘world’s quietest fan coils.’ I would repeat this phrase 13 times during my hour-long presentation, and at the end, an engineer would always ask to hear the fan coil to prove how quiet it is. I would then reveal that there was one running the whole time that nobody had noticed because it really is that quiet.”

“The issue is that North America has slightly different needs compared to European markets, and it is much harder to certify a unit in North America for safety,” Chaters explains. “Every time we decide to bring a new unit into the market, the engineers have to start from scratch, designing a new unit with 60-hertz components, the U.S. standard. Europe’s is 50-hertz.”

The development of the North American versions of the units takes time, and the different requirements make the design of the units a bit bigger and more expensive than European counterparts. However, Chaters says they are currently developing three new units that will be ready to enter the market within the next few months.

Aermec is also working on transitioning to using the new standard refrigerant to start in 2024, when the RS 410 No S refrigerant can no longer be used. While many American companies may not be ready for this change, Europe has been using the new refrigerant for six years, making this an easy transition for Aermec. “Europe is always ahead on environmental efficiencies,” Chaters notes. 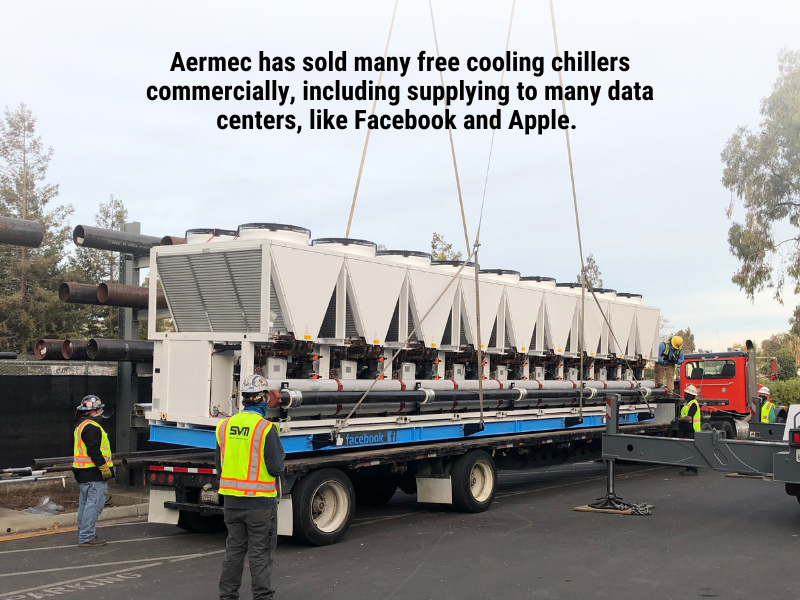 Because Aermec’s products were first developed to meet European standards, they have features that put them ahead of many American products. In Europe, when a manufacturer declares efficiencies to the government, defrost is a penalty. In the United States, it is not. And so, Aermec’s products have been developed with an efficient and smart defrost.

The heat pumps take the heat from outside in the winter and pull it into a building to create energy or provide heat for about 2.2 to 2.3 COPs. “For every dollar you spend on electricity, the heat pump gets $2.30 worth of heat,” Chaters explains.

Aermec has sold many free cooling chillers commercially, including supplying to many data centers, like Facebook and Apple. “These products have an extra coil, like the radiator on a car.  Glycol runs through the fans, and cold air cools that water before it goes to the compressor,” Chaters explains. “This provides free cooling temperatures from 50 degrees to 32 degrees Fahrenheit. No compressors are used. The product simply cools the glycol to provide cooling to the building. The energy savings are about 30% compared with another chiller doing the same thing.”

“Our simultaneous heating and cooling units are a good option for a building that requires heating and cooling concurrently, such as a hospital or pharmaceutical building,” he continues. “These units also provide heat recovery by pulling back the heat produced rather than dumping it outside, with efficiencies with COPs of 7 or more. This means the unit provides about $7 of heating and cooling for every dollar spent on electricity.”

Chaters adds, “The heat recovery units do the same thing, except when there is no cooling, the units do not provide free heat. With the simultaneous units, you can get cooling or heating whenever you want.”

Want to Learn More About Aermec?

Coward Environmental Systems, Inc. is proud to represent Aermec in the Philadelphia region, Central PA, Delaware, and Maryland. Contact us today to discover how Aermec can be a part of your next project.